I’m currently doing a master on Innovation in European Business, and since change is essential for innovation of any kind, the topic of change and the different stages of change has been addressed in detail. It’s a major issue that organizations spend a large amount of energy and funds into because it determines whether or not an organization can succeed and stay relevant. This particular model of describing the stages of change is the one I found most interesting and relevant to the competence of “reflecting acceptance of ambiguity and change”.

It might be easier to notice how people are dealing or resisting change, but the real challenge is to identify it with oneself. This article helps trainers to accept that change is challenging for self and for others and gives a tool that helps to identify the different stages of how to deal with change whether in a training session or in project-based work. This gives them the power to manage the change process and guide it, as well as utilize the knowledge of the change model stages.

Change is a natural process, nothing stays the same. However, people have different reactions to change, and the general view is negative when it comes to change. This is so common and so important that even on an organizational level, it is still an issue that needs to be addressed. When an organization wants to improve its process by introducing a new (usually better in some way) one, for example, one of the main things they focus on how to deal with this change so that it doesn’t create a backlash or to make sure that the change is sustainable. This was too big of an issue that they created a specific term for it called “change management” and a full branch of management science in that direction.

“Change management is a systematic approach to dealing with the transition or transformation of an organization’s goals, processes or technologies. The purpose of change management is to implement strategies for effecting change, controlling change and helping people to adapt to change” (Rouse, 2018).

In Fact, organizational change is one of the buzz terms that emerged in recent years. This term identifies three key factors in managing change which are technology, processes, and people. However, they noticed that 80% of change programs fail due to giving priority to technology or processes rather than people (Gibson, 2011). Where chances of successful change programs are at their max when the priority is people because people are the constant variable in the change process. Change will always involve people even if that change was related to processes or technologies.

The reason why people need to have priority in any change program is that they go through the five stages change model of Kubler Ross, change does not happen with a magical snap of fingers. The five stages of change can be used for both individual and organizational purposes, it was not created for one or the other specifically. These stages are (Treacy, 2018): 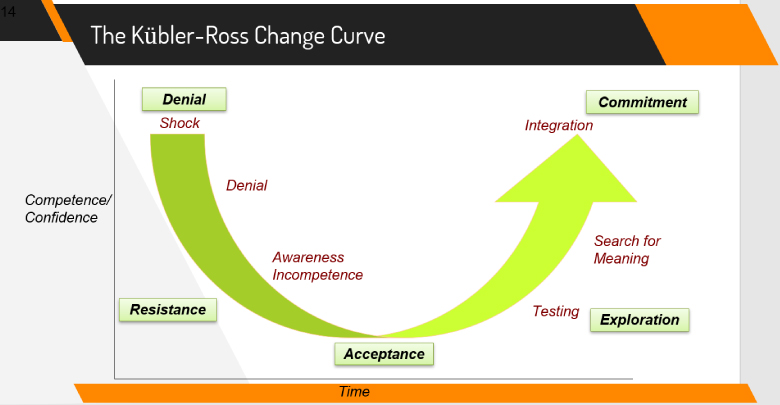 Each one of those stages takes time, which differs from one person to another. And the confidence level starts going down with the first stage until it reaches its minimum on the acceptance stage, only to rise back up to normal or high levels on the last stage. The following modified visualization of Kubler-Ross curve clarifies this point:

Reflecting all of the above on a group level, it would be vitally important to understand which of these stages an individual is going through. Dealing with an individual who is still in the resistance stage is not the same as dealing with one who is in the commitment stage. In addition, group dynamics might work with or against, meaning that the power and effect of the group might drag those who are in later stages back to the early ones (negative group effect) or vice versa. 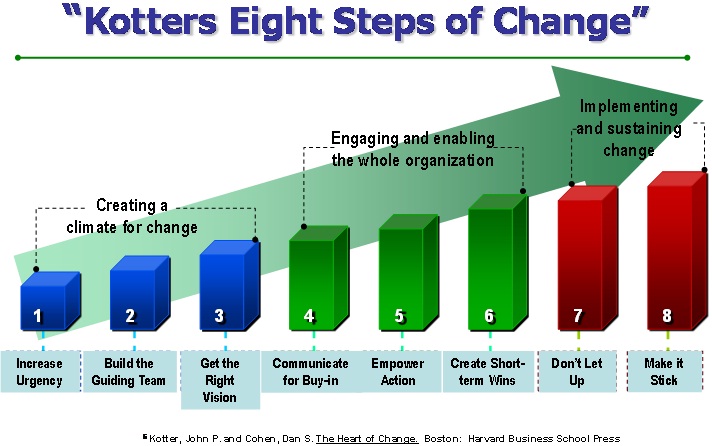 Concepts from change management can be applied in a group setting, considering that some group dynamics work in a similar way to a small organization. A professor named John P. Kotter from Harvard Business School created eight steps change model to ensure a successful change, these steps are considered the best in this area of organizational change and he addresses most of the common errors of change. All of those steps are focused on people, not on processes or on technologies (Gibson, 2011). The steps are divided into three phases, where in phase one (the first three steps) is focused on creating a healthy climate for change. Phase two (second three steps) is focused on empowering people to take action and encouraging it, the last phase (last two steps) is focused on sustainable change, making sure that the changes stick on the long run. Below is a visual illustration of the above: 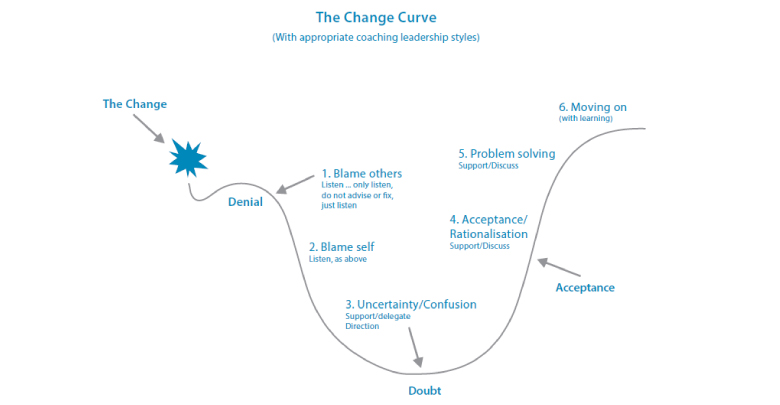 For individuals, there is usually an event or a trigger for the change. This represents the starting point of the change, and in many cases the reason for it as well. Individuals react differently between blaming self or blaming others or even a mix of both, which is usually the longest and most unpleasant stage but also the easiest to spot. Once they get passed this, then the open stage begins. Where individuals start to experience doubt, uncertainty and confusion. through this stage, individuals become ready to move on and find a solution and might even start seeking guidance and asking for it. For the following stages, individuals are easier to work with, allowing more harmony and collaboration with the group/team. The tricky issue, however, is to find the balance in pace when dealing with a group, not everyone is going to go through these stages in the same speed, and some might even go through them so fast that they fail to sustain it.

Even though there are several adaptations and applications of the Kubler-Ross Model of change, there are general key points to take from it. Being a group or an individual, it starts with refusing to believe that there is a need to change. Then it goes through the process of accepting the need to change, followed by finding the right change usually represented by a solution. This model serves as a tool to help to guide people in order to achieve a certain goal which is new or foreign to them. This can be done by identifying the stage where the individual or group are in, then paving the way for them to move on to the next one and so on until they make it. Assuming that those changes are positive, necessary, or beneficial.

Whenever I find myself resisting denying something, consider that I might be going through the early stages of the Kubler-Ross model, then go back to the root cause of it. If it is related to change, guide myself through the stages (asking for help if necessary).

The Downside of Knowledge 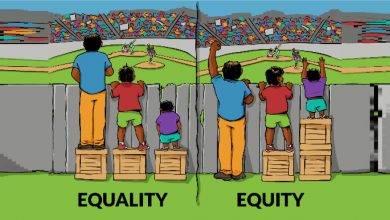 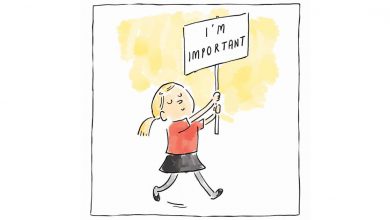 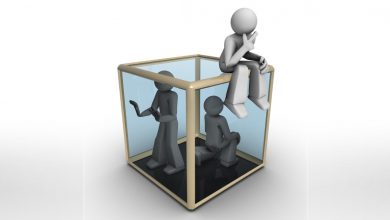 The Game of Culture